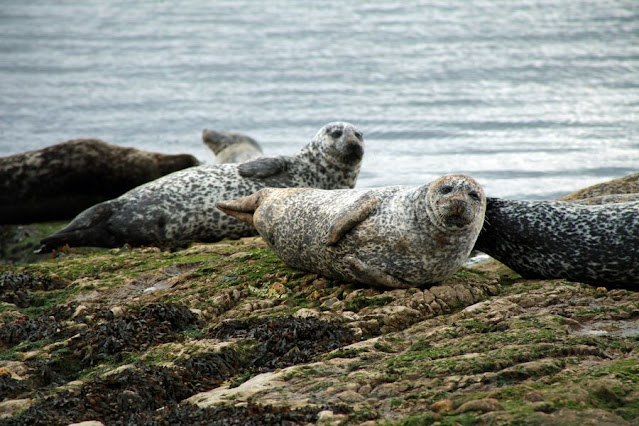 I've been a lover of Irish names my whole life -- I was even gifted a book all about them when I was younger, and marked so many that I wanted to remember (both for future children and pets). So it's no surprise that I am constantly trying to foist Irish names on everybody! Ronan is a favorite of mine and I love that it sounds both soft and strong, with the lovely unisex nickname of Ro. And I think the meaning is adorable: "little seal". It comes from the Old Irish rón (meaning seal) combined with a diminutive suffix. Recently, Ronan has seen a bit of an uptick in the US; in 2020 it ranked #269. It also has a bonus bit of charm for Catholics -- There are several early Saints named Rónán, one of the most famous being one who built the hermitage at Locronan in the 6th century.

A Latin favorite of mine, by way of England. Ambrose comes from the Late Latin Ambrosius, which in turn came from the Greek Ἀμβρόσιος, meaning "immortal". It has a soft, romantic feel, and brings to mind another, more chivalrous age. Another connection I love is that the Welsh version of this name -- Emrys -- is commonly used as the first name of Merlin! And it's still rather underused, making it an undiscovered gem.

I first heard this named used on a little boy in a Scandinavian TV show, though I can't remember which, and ever since this I've been enamored with it. It is a form of the Latin Albinus, which came from cognomen Albus, meaning "white or bright". I love the sort of Pan-European appeal it has, which makes it easy to fit in almost anywhere.

What do you think of my choices? As always, I'd love to hear your opinions!