Showing posts from September, 2016
Show all 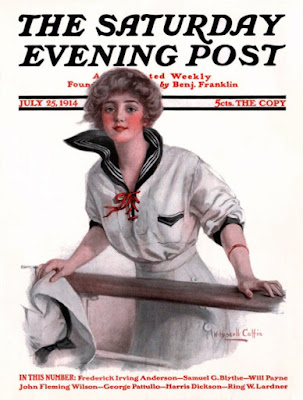 The Saturday Evening Post, July 25th 1914 I'm so sorry I haven't been keeping up with the month posts but I've recently gotten a job and I'm still adjusting to it and trying to get back to doing anything outside of work! So I'm going to quickly try and catch up starting with July. July is the seventh month of the year. It was named after Julius Caesar, as it was the month he was born in, and was previously known as Quintilis, which meant "fifth" (the Romans originally had only ten months in the calendar - starting with "Martius" or March). He was born Gaius Julius Caesar of the ancient and powerful Julia family, which boasted the claim that they were derived from Iulus , a son of the Trojan Prince Aeneas, which in legend was said to be the son of Venus. The Romans celebrated the festivals Poplifugia and Ludi Apollinares, the latter celebrating the God Apollo  by playing "ludi" or games, which were held at the Circus Maximus, an
Post a Comment
Read more
More posts