Showing posts from February, 2016
Show all

Princesses Irene, Victoria, Elisabeth, and Alix of Hesse - 1885 -Slight spoilers ahead for "The Witch"- Alix - I love this short but regal form of Alice. I've seen that it can be pronounced either ay-LEEKS or ah-LEEKS, though I'm not sure which is correct, or if they are both legitimate pronunciations. Alexandra Feodorovna was originally Alix of Hesse. Her full name was Victoria Alix Helena Louise Beatrice. Thomasin, Caleb, Mercy, Jonas, and Samuel - I'm a horror film junkie, and was so excited when I first saw the posters and trailers for "The Witch". I finally got to see it Saturday and it was really good (go see it!). The eldest daughter in the movie is named Thomasin, which I was pleasantly surprised by. The other children are Caleb, twins Mercy and Jonas, and baby Samuel. I thought they were all lovely names, especially together. Bathsheba - The old woman who portrayed the witch (the old version) is Bathsheba Garnett. Bathsheba is a huge g
Post a Comment
Read more

Windsor's Room Attn: I've never said this before, but I feel the need to clarify that all of these names belong to real children whose parents have probably put a lot of time and thought into their names. They may not be to everyone's taste, but that does not give anyone the right to criticize them harshly. Please be thoughtful when discussing the names of the children in the Apartment Therapy series. Thank you so much! Girls: Opal Marina Valentina Jessica Bela Windsor "Winnie" Isla Margaret (Sister to James and John) Heidi Clara Farida Margot Bowie (Sister to Luca) Ainsley Lorelle Romane Karuna and Ora Colette Hera Sloan Evangeline "Eva" Vera Mae Raegan Elliette Violet Schuyler Cordelia Robin Holiday Violette Marlowe Zoya and Soohia (Sisters to Zayn and Sayf) Tilly Ever Boys: Hayden Finn Roscoe Caleb Llewyn Monroe Joe Lennon Zayn and Sayf (Brothers to Zoya and Soohia) Finnegan Mavrick Holden Santiago
Post a Comment
Read more

The Children of William III of the Netherlands

Toby Wing (born Martha Virginia) I've noticed a lot of people really like boy or at least boyish nicknames for girls here lately, and as a society this says a lot about us. It all boils down to this: masculine = good, feminine = bad, even for women. Boys aren't allowed to be feminine, and it has contributed to an ideal of hyper masculinity, which not only damages us women, but boys too. And of course it's a good thing if little girls prefer playing in the mud to painting their nails or playing with dolls, when all of these things should not only be available, but accepted and endorsed for all people and children, regardless of gender. I'm not exempt from this trend, though.  My favorite name right now is Josephine, and I'm certain if I had one I'd call her Jo or Joey half the time. I think it's something worth thinking about, and talking about, though naming is just a ripple in the pool of gender politics. But I'm going to throw politics to the
1 comment
Read more

Names of the Ziegfeld Girls

Hazel Forbes by Alfred Cheney Johnston The "Ziegfeld Follies" were theatrical productions on Brodway which ran from 1907 to 1931, with two more shows in 1934 and 1936. They were the brainchild of Florenz Ziegfeld (though his wife probably thought it up), who was inspired by the Folies Bergère, a famous cabaret music hall in Paris. Almost as famous as the shows themselves were the "Ziegfeld Girls", beautiful chorus girls in elaborate dresses. Many actresses were also Ziegfeld Girls, from Marion Davies to Barbara Stanwyck (a few listed below later became actresses) and just as many were turned down, including Lucille Ball, Norma Shearer, and Joan Crawford. Here are interesting names from just as interesting women. Cecile Arnold Joan Blondell Adrienne Ames Billie Dove Justine Johnstone Kitty Kelly Tamara Geva Micki Marlo Caja Eric Bird Millman Kay English Geneva Mitchell Mitzi Mayfair Nita Naldi Lucia Pamela Alice Wilkie Muriel Finlay Ruby Keeler
Post a Comment
Read more 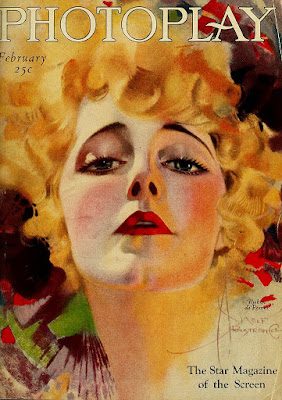 Photoplay, February 1921 February  is the second month of the year. It is the shortest month and the only month with fewer than thirty days in it. The Romans called the month  Februarius  which came from the Latin  februum , which means "purification". Februa was a purification festival held by the Romans from the 13th of February to the 15th, which was sort of a "spring cleaning" type of ritual. A God,  Februus , who personified the month and purification, came afterwards, and may have even gone on to become  Febris,  (meaning "fever") a Goddess of her namesake and malaria. In Finland February is called  Helmikku , which means "month of pearls", referring to the snow droplets on branches that freeze into something resembling pearls. It's birth flower is the  Violet  and common  Primrose . The birthstone is the  Amethyst , a gem thought to protect one from becoming drunk, and the Zodiac signs are  Aquarius , the water carrier  Ganymede
Post a Comment
Read more

Daisy Ridley Daisy - Daisy was a name I could never get behind. I thought it was too cutesy, too, well, flowery. But Star Wars breakout Daisy Ridley has really changed my opinion. She's spunky and sweet, and portrayed the passionate Rey wonderfully. Her full name is Daisy Jazz Isobel Ridley, and has five sisters, two of which are named Kika-Rose and Poppy Sophia. According to Daisy, J.J. Abrams loved saying her full name, stating it had a nice feminine first but was balanced out by the hard masculine Ridley. Domhnall - Another actor in "The Force Awakens", an Irishman who's gotten tons of good work lately, including "The Revenant", "Ex Machina", and Oscar nominated "Brooklyn". He is still probably most famous, however, for portraying Bill Weasley, alongside his father, Brendan Gleeson, who played Mad-Eye Moody. Domhnall often describes the pronunciation of his name as "tonal with a D". It's the Gaelic form of Donald, w
Post a Comment
Read more
More posts