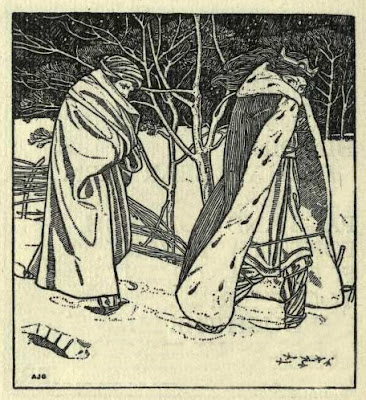 Are you ready to learn the history behind the beloved Christmas song? Today's name is Wenceslas!

Wenceslas, or Wenceslaus, is a Medieval Latinized version of the Slavic Veceslav. Veceslav comes from the elements veche, "more" and slava, meaning "glory". The later form may have been influenced by the Czech word věnec, which means "wreath" or "crown".

The eponymous figure from the classic Christmas song is based on Wenceslaus I, Duke of Bohemia, sometimes called Václav the Good (921-935). The song tells of a "good king" who travels through the harrowing winter weather to deliver alms to the poor on the feast day of St. Stephen. His page is about to give up, but through following the king's prints, step for step, he makes it through the blizzard. While Wenceslaus wasn't crowned until after his death (thanks to popularity and his eventual canonization), there were many who could attest to his good deeds. A preacher from the 12th century wrote:

"But his deeds I think you know better than I could tell you; for, as is read in his Passion, no one doubts that, rising every night from his noble bed, with bare feet and only one chamberlain, he went around to God's churches and gave alms generously to widows, orphans, those in prison and afflicted by every difficulty, so much so that he was considered, not a prince, but the father of all the wretched."

In September of 935, Wenceslaus was invited to a feast celebrating the Saints Cosmas and Damian by his brother, Boleslaus the Cruel. There, three of Boleslaus' companions, Tira, Česta, and Hněvsa, fell upon Wenceslaus, stabbing him to death. As he collapsed Boleslaus ran him through with a lance.

A sad end to a, by all accounts, kind and gentle man, though that is the unfortunate fate awaiting all saints. I think if you can get past the history, Wenceslas would be a perfect choice for a Christmas baby, better yet if you're Catholic!

What do you think of Wenceslas?

(Below is the song performed by Bing Crosby.)