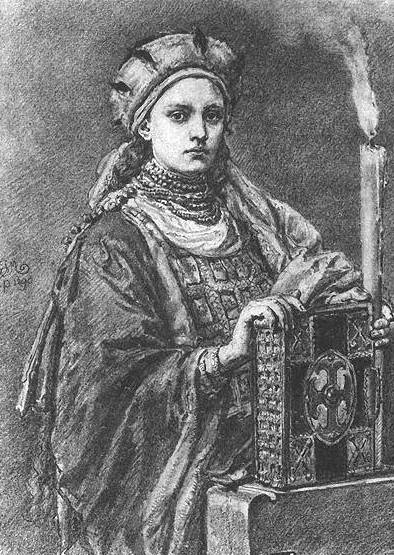 Boy, do I have a mouthful for you today! This year, I read the book Widow Queen by Polish author Elżbieta Cherezińska, and while the book was a bit of a disappointment, I came away with a fascination for the unknown princess -- and her name.

Świętosława was a Polish princess born sometime from 968 to 972, a daughter of Mieszko I, the founder of the first independent Polish state in the form of a Duchy. Her brother, Bolesław the Brave, was the first crowned King of Poland. Very little is known about Świętosława, and what is known may not even be about her at all, but another woman. According to German chroniclers of the time, she was first married to Eric the Victorious of Sweden, and gave him a son named Olof, who later become King of Sweden. Upon Eric's death she was married then to Sweyn Forkbeard, who would eventually become King of Denmark. She gave him two sons, Harald II of Denmark, and Cnut the Great, King of England, Denmark and Norway, collectively.

In Icelandic tradition, these Kings were married instead to a woman called Sigrid the Haughty. Today, her existence is questioned by scholars, but some believe she was the same woman, or perhaps simply two different wives of Sweyn Forkbeard. As with so many women in history, we may truly never know because in so many accounts the wife's name is not given, seen as less important than those of her husband and the sons she bore him.

As a name, Świętosława is simply the feminization of Świętosław, the Polish form of Svyatoslav, coming from the Slavic svetu, "blessed, holy", and slava, "glory". Another Świętosława of Poland, born sometime in the 1040's, would go on to become the first Queen of Bohemia, cementing its regality. What are your thoughts on Świętosława?