My sister, K-pop lover that she is, was the first one to bring to my attention Fatou Samba, one of the first black members of a K-pop group, and her beautiful name. Fatou is a diminutive of Fatoumata, a version of the Arabic Fatimah, which is popular in French-influenced parts of West Africa. Fatou herself was born in Senegal, but raised in Belgium. 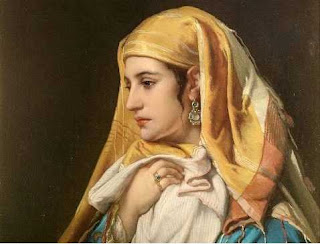 Fatimah means "to abstain", and its most famous bearer is a daughter of the Prophet Muhammad and eventual wife of Ali, fourth of the Rightly Guided Caliphs and the first Shia Imam -- Fatimah bint Muhammad. According to Sunni Muslims, she was the youngest of his daughters, while Shia Muslims believe she was the only child who lived to adulthood; either way, Fatimah is regarded as an incredibly important figure of the Muslim faith, venerated and respected as the child closest to Muhammad. Because of this she is often called Fatimah al-Zahra, meaning "the shining one".

Fatimah, after her mother, Khadijah, is seen as one of the most important Muslim historical figures, and is not only a leader of women in this world, but is thought to lead them in Paradise. Fatimah is, to this day, the most popular female name throughout the Muslim world.

My favorite names are those of interesting historical or mythological figures, especially those of strong women whose legacy lasts still today. What are your thoughts on these beautiful names? Leave a comment below to share your thoughts!