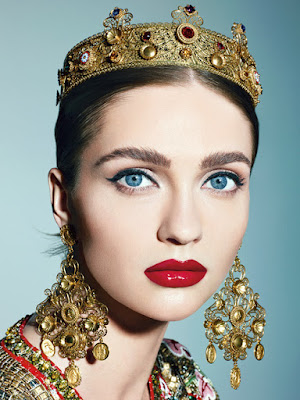 I always love discovering new and unusual names, and love trying to find where they come from, so I was excited to do some research on Thadéline. To me, Thadéline looks like a form of the Ancient Germanic Theudelinda, also sometimes seen as Theodelinda or Dietlinde, which comes from theud, "people", and linde, "soft, tender". I would pronounce it either as "THAD-day-leen" or "TAH-day-leen".
Another idea is that is possibly just an elaborate feminine form of Thaddeus, meaning something like "heart". Theodelinda was a Queen of the Lombards, and is credited as building churches in Tuscany and Lombardy, after converting her second husband, Agilulf, to Catholicism. Either way, it is a beautiful name! Thanks for bringing this one to my attention.
Germanic Royalty unusual